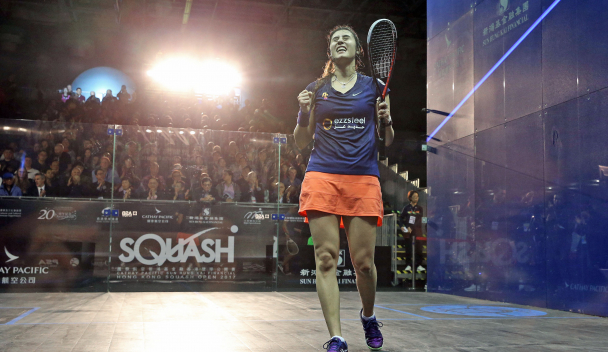 World Champion Nour El Sherbini will appear in the final of the Hong Kong Open for the first time in her career after she overcame 2015 finalist Laura Massaro in five games.
The Egyptian World No.1 had lost to Massaro in three of their last four matches, but she hit the back corners particularly well in the opening game to go a game ahead.
The second game looked to be following for El Sherbini as she continued to find openings against Massaro, but the player from England switched things up to close the front of the court down and that rattled El Sherbini, who struggled to respond.
Massaro came back from 5-4 down to take seven straight points and level the scores and her momentum continued into the third as she took the lead for the first time.
But El Sherbini came out fighting in a crucial fourth game to level and she stormed over the finishing line in the decider, dropping just three points to earn her place in the final.
“Playing Laura is very hard, and in the middle of the match, I thought that I just needed to give it everything,” said El Sherbini.
“I had to go for my shots and stick to my plan. I went point-by-point and I’m really happy to win today so I can be in the final.
“Everyone is trying to improve their game and whoever is stronger mentally and physically is the one that will win in the end. I’m glad I kept my focus until the end.
“I’m feeling good, it’s only my second time here in Hong Kong. I’m happy with the way I’m playing and hopefully I can keep on going tomorrow.”
Result
[1] Nour El Sherbini (EGY) bt [4] Laura Massaro (ENG) 3-2: 11-7, 5-11, 5-11, 11-8, 11-3 (56m)